From an Egg to an Angel

To be able to share with other bird lovers the experience of raising these incredible creatures has been a long-term dream. So many of our familiar parrots are very close to extinction as habitats continue to decline and the planet becomes more toxic, physically and spiritually.

Unfortunately, Moluccan cockatoos rarely take care of their young in captivity. This necessitates the artificial incubation, hatching and rearing by humans. We were blessed when we purchased a proven pair of them in the early 1990’s. They were probably wild caught birds and it now sickens me to think of how they were probably captured. This was all before the Wild Bird Act of 1992 and before we, thankfully, stopped the importation of parrots to the United States.

It may seem ironic that the birds shown in this slide show are Moluccan Cockatoos, because this species is probably the one that is least adaptable to our modern homes and the one that most behaviorists agree should never have been taken from the wild. There is a movement to discourage breeders from raising the white cockatoos since so many of them end up in sanctuaries or second, third or more homes. I think the images speak for themselves, but, don’t go out and buy one. If you must, adopt or visit them at sanctuaries and zoos. Share our experience through this slide show.

The shots of the eggs were taken while they were being incubated in a Grumbach incubator. The first shows the fertile egg at about day 12 of development. At the center of the egg where the veins begin to branch you can actually visualize the baby heart. If we had taken movies, you could actually see the heart pulsating. 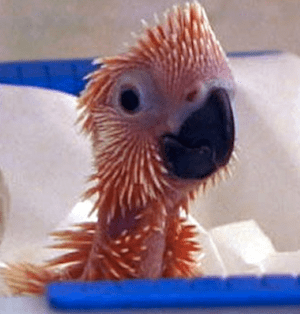